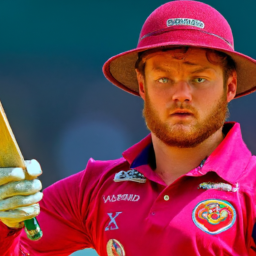 On the first day of February, Ben Duckett – the Northamptonshire County Cricket Club Head Coach – has declared ‘there is no real mystery’ to the spin

On the first day of February, Ben Duckett – the Northamptonshire County Cricket Club Head Coach – has declared ‘there is no real mystery’ to the spin of the Club’s talented young teenage bowler, Abrar Ahmed.

Ahmed, who at just 16 years of age has already started to make a name for himself within the cricket world, has been developing his unique spin for some time now. With seven overs for the U17s National Performance Academy team against Kent earlier this year, he put in a performance which caught the eye of many within the cricketing world. Duckett is among those impressed, recently stating ‘I was incredibly impressed when I witnessed Abrar’s spell of bowling. What is most striking about it is the pace and speed of his releasing the ball.’

Ahmed represents a new wave of teenage fast bowling talent which breaks the mould of traditional spin bowling, bringing with it a modern and innovative approach which has continued to mature and impress in recent months. But according to Duckett, ‘what’s so special about Abrar is that there is no mystery to his spin – it’s just good solid skills’.

The Head Coach, who is widely regarded as having been a major influence in Ahmed’s development, has been widely praised for his ability to mentor young talent. This is something Duckett is clearly very proud of, stating ‘I’m really proud of how he’s developed, not just over the past few months, but over the past few years’.

For a 16-year-old, Ahmed has already made huge steps in the cricket world – and only time will tell what marks he will leave. Duckett understands this, concluding that ‘I don’t want to get ahead of ourselves. Abrar still has a lot to learn, but at the same time it’s really encouraging to see a young talent making such great strides’.

Northants all-rounder Ben Duckett has praised the spin bowling of teammate Abrar Ahmed, saying there’s “no real mystery” to it.

Duckett, who’s been a mainstay in Northants’ side in the County Championship and T20 Blast this season, believes Ahmed has been the standout performer for the team in recent weeks.

He said: “Abrar has been one of our most consistent performers, and he’s been getting great turn and bounce out of the pitch. There’s no real mystery to his bowling, it’s just about getting the basics right and trying to keep the batsmen guessing.

“There’s a lot of excitement around him at the moment, and he’s got some serious potential. I’m sure he’s got a bright future ahead of him.”

Ahmed has enjoyed great success in the County Championship this season, taking 30 wickets in seven matches.

He’s also been a key player in the T20 Blast, taking 17 wickets in 11 matches and helping Northants to the quarter-finals.

He’s become an integral part of the team, and his efforts have earned him plenty of praise from his teammates.

Duckett has been full of advice for Ahmed since he joined the team. He believes there’s a few key points to remember when it comes to spin bowling:

Ahmed has been a real asset to Northants this season, and his spin bowling has been a key part of the team’s success.