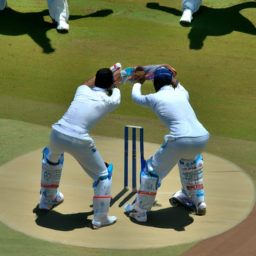 Timberwolves win NBA draft lottery; Hawks will pick sixth
Zaheer and Shastri ‘don’t see any reason’ for India players to play in overseas leagues
Delhi in line to host a Test after five years during Australia tour in 2023

Virat Kohli’s stunning knock of seventy-nine off fifty three balls in a Twenty20 match against England has been applauded by cricket experts who agree that the skipper has reached the peak of his powers in fitness, technique and talent. Cricket pundits, Anil Kumble, and Stephen Fleming, recently gave their insights as to why Kohli’s performance was ‘perfect’.

Anil Kumble, who is India’s highest wicket-taker and former coach of the national team, was left astounded by Kohli’s class and poise during the match. He believes the innings was a testament to how the Indian cricket captain had finely honed his technique to push himself to the boundaries of peak physical fitness. Kumble said: “He was pushing himself to the limits, and you could see that in the way he was really stretching for shots on the leg side, showing tremendous footwork to get across for his pull shots and smashing the ball again and again with strength and accuracy”.

Stephen Fleming, recognisable in the cricketing world for being both a former New Zealand cricket team coach and a masterful batsman, highlighted in his commentary the ‘fluidity and illusion’ which Kohli possessed during the innings. He postulated that the skipper’s technical prowess paired with his new-found physical strength made it easier for him to break down an otherwise potential tough offside field structure. Fleming enjoyed Kohli’s methodical approach to craft his shots, his quick recognition of how to stay ahead of the bowler, the balance of risk and reward throughout the innings and his retention of concentration till the last ball.

Kohli’s extraordinary batting has been lauded inside and outside of India. Without a doubt, his approach to batting represents the high standard any cricket player should aspire to reach.

Kumble and Fleming’s analysis revealed that the most remarkable aspect of Kohli’s batting style is his focus and attentiveness when it comes to assessing the field. Kohli is able to consistently hit boundaries and reach peak fitness by honing in on the opposition. He is able to pick out gaps in the field, identify areas that can be exploited, and take calculated risks when necessary.

Another impressive element of Kohli’s batting style is his weight transfer. By distributing his weight in an even manner across his body and his shot, Kohli is able to generate power and generate more distance. This allows him to hit more boundaries and reach peak fitness while still being able to control the shot.

Kohli And His Approachable Stance

Finally, Kohli’s approachable stance allows him to react quickly to changes in the ball’s direction. This reduces the margin for error when executing shots, enabling him to make more accurate decisions and more consistent contact with the ball. This helps Kohli reach peak fitness and be more successful in boundary-hitting.

Kumble and Fleming’s analysis highlights the importance of focus, balance, and approachability when it comes to perfecting one’s innings. By taking these three elements into account, Kohli is able to reach peak fitness and consistently hit the boundaries when batting.

Kumble and Fleming have broken down the qualities that enable Virat Kohli to play at peak fitness, boundary-hitting and successful innings. Their analysis highlights the need for focusing, good weight transfer and an approachable stance which enables a more consistent contact with the ball and accurate decisions.