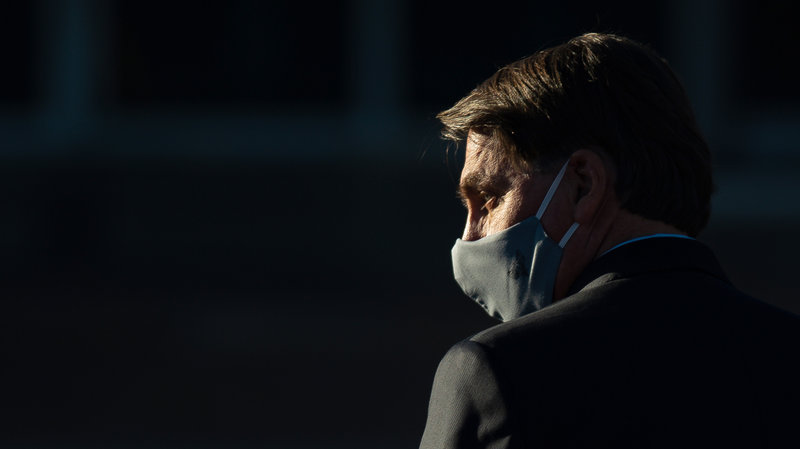 Jair Bolsonaro has tested positive for the coronavirus. The Brazilian president, who has consistently downplayed the dangers of the virus, revealed his positive test result during nationally televised remarks Tuesday. “It came back positive,” he told reporters from behind a mask.

He is just the second major world leader, after British Prime Minister Boris Johnson, to confirm he contracted the virus.

With more than 1.6 million confirmed cases as of Tuesday, Brazil is in the throes of the world’s second-largest outbreak, behind only the U.S. More than 65,000 people there have died of complications linked to COVID-19 — a towering death toll that again stands second only to that of the U.S. And because of a significant lag in testing, Brazilian researchers believe the real numbers are much, much higher than the official tallies.

Yet Bolsonaro, 65, has repeatedly doubted the severity of the virus since it first found a foothold in Brazil, reportedly in late February. A key ally of President Trump, the right-wing Brazilian leader has called the coronavirus “a little flu,” accused the media of hysteria and campaigned against the shutdowns implemented by local leaders.

I’m sorry,” Bolsonaro said in April, after the country’s death toll reached 5,000, “but what do you want me to do about it?”

Tens of thousands of deaths later, Bolsonaro has remained firmly supportive of reopening and skeptical of social distancing, both for others and himself.

Last week, he vetoed legislation that would have mandated the use of face masks in schools, churches and businesses. During a luncheon hosted last Saturday by the U.S. ambassador in Brazil, Bolsonaro was photographed embracing his foreign affairs minister, flashing a smile and a thumbs-up.

The American ambassador, Todd Chapman, was seated on the other side of the president. Bolsonaro, Chapman and all of the other men in the image weren’t wearing masks.

It’s not the first personal run-in with the virus for Bolsonaro, who took office in early 2019.

The Brazilian leader says he has taken several tests, all of which came back negative before Tuesday’s result. During one such scare — in March, after a trip to Florida to visit Trump — several members of Bolsonaro’s delegation tested positive.

But by Sunday, Bolsonaro’s luck had run out.

That’s when he says he began experiencing symptoms such as fatigue, muscle pain and fever. He revealed to reporters Monday night that he had taken a coronavirus test and was awaiting results, adding that doctors had also taken a scan of his lungs that had come back “clean.”

On Tuesday, he said his medical team is now treating him, among other things, with hydroxychloroquine, the controversial anti-malaria drug that both he and Trump have touted as a means to prevent and treat COVID-19. Trump himself even declared that he had taken the drug to ward off the virus, despite the Food and Drug Administration’s warnings against its use for that purpose.

And once more, he urged Brazilians not to worry about the public health crisis that has been surging across the country in recent weeks. Now suffering from the early stages of the virus himself, he maintained that there is nothing to worry about.

“The fact I’ve been infected shows I’m a human like anyone else,” he told reporters. There’s no need to panic, he added. It’s time to get back to work.