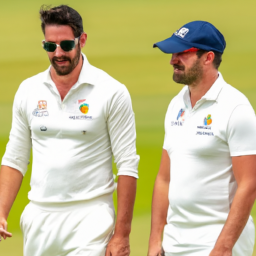 Dean Elgar, Pat Cummins confident their sides have moved on from Newlands 2018

The 2018 Test Match at Newlands, South Africa, was a source of controversy amidst the members of both sides, with Australia and South Africa clashing

The 2018 Test Match at Newlands, South Africa, was a source of controversy amidst the members of both sides, with Australia and South Africa clashing in a tumultuous match. Nevertheless, 3 years on, South Africa’s Dean Elgar and Australia’s Pat Cummins assert that both teams have moved on from the match as they approach each other in this years Test series.

During the 2018 Test match at Newlands, South Africa, Australia’s Match Referee, David Boon, gave a string of decisions for South Africa which forced the senior players of the South African side to become agitated and display a vocal dissent. This resulted in the South African team being fined 20% of their match fees and their captain, Faf du Plessis, receiving a demerit point on his record.

This years Test series sees both sides come together and, in an interview with Elgar, he disclosed that both sides have put the incident behind them and are ready for this upcoming series. He stated “…I think that’s been put to bed, and I think both teams have moved on from that incident and are ready for this series”. Pat Cummins, the current captain of the Australia team, expressed the same sentiment in his pre-match press conference, expressing that “Both sides have moved on and [we] are just looking forward to exciting cricket out on the field now – rather than continuing to talk about what happened in the past”.

With both sides showing eagerness to look forward, perhaps this highly anticipated series can be a chance for both teams to show the cricketing world that hard-fought cricket can be enjoyed without the taint of past controversy.

This series between South Africa and Australia is set to begin on the 17th February with a 4-day warm-up match and a 3-Test series that follows.

In 2018, a major cricket controversy shook the world when the Newlands ball-tampering incident occurred. This left the South African cricket team and Australian cricket team in disgrace. After the following lengthy bans imposed on the players, both teams were looking to move on from the controversy. Dean Elgar and Pat Cummins, two prominent figures from South Africa and Australia, are confident that their teams have moved on from Newlands 2018.

Dean Elgar believes that South Africa have definitely moved on and that the team is in a better place, both emotionally and physically. After the incident, South Africa had to face some major personnel changes, such as the loss of several key players and the formation of a new coaching team. Elgar stated that this has proved to be very beneficial and that the team has managed to re-establish itself as a beacon of world cricket.

Pat Cummins is also of the opinion that the Australian side has managed to move on from the controversy. After the bans of the three main players, who were the center of the scandal, Cummins said that the team was in shock and that it took a while for them to heal and move on. Over the years however, prominent replacements have been integrated and the team has become a powerhouse in the cricket world.

While intense scrutiny still remains around the incident, Elgar and Cummins remain adamant that their sides have moved on. They both remain confident that, with a bright and talented bunch of players across the board, both teams are ready to face off each other in future cricket clashes.