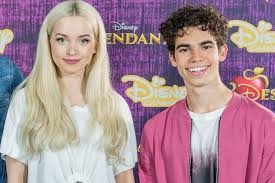 Cameron Boyce’s friends and family are honoring the late actor on what would have been his 21st birthday in the best way they know how — by giving back.

Boyce, who died in July 2019, would have turned 21 on Thursday. To pay homage to Boyce’s legacy on the milestone date, the Cameron Boyce Foundation has teamed up with his former Descendants costar Dove Cameron to launch a new T-shirt campaign for the actor’s anti-gun violence initiative, Wielding Peace.

The limited-edition Dove x Wielding Peace collection features t-shirts embroidered with Cameron’s tattoo, a gun with flowers coming out of the barrel, which she got in honor of Boyce’s Wielding Peace campaign earlier this year.

“Cameron was a light,” the actress tells PEOPLE. “Every year on his birthday he did something to give back, and this year, The Cameron Boyce Foundation is honoring his legacy by continuing that tradition on what would have been his 21st birthday. I could not be more proud to support this cause for my friend, whom I miss every day. I got my tattoo in his honor, and as such The Cameron Boyce Foundation has asked to feature the design on these special limited edition T-shirts.” Proceeds from the campaign will support The Cameron Boyce Foundation’s efforts to end gun violence and cure epilepsy.  A portion of the profits will also be donated to The Actors Fund COVID Relief, which supports everyone in entertainment who have been affected by COVID-19.

“I am so honored to be a part of this incredible organization in support of my cherished friend, and I encourage everyone to please go and purchase it so that we can continue to advocate to end gun violence, fund epilepsy research and contribute to ending the global water crisis,” says Cameron, 24.

While the campaign lasts for one month, the foundation plans to uphold Boyce’s legacy by annually giving back and helping another organization in need each year on his birthday.

“In lieu of gifts, each year on his birthday Cameron would do something charitable to give back to the community.  Philanthropy and giving were second nature to him,” a spokesperson for The Cameron Boyce Foundation tells PEOPLE. “While he appreciated nice things, it was always important to him to use his resources to help people who were in need, or to advocate for the many causes that were dear to his heart.” She continues: “As he was famously quoted, ‘We all go… what you leave should be bigger than you.’  Cameron has undoubtedly left a gaping hole in the hearts of so many who loved him, but beyond that, he has managed to leave a tremendous legacy… one that The Cameron Boyce Foundation is committed to continuing.”

Ash Avildsen, CEO of Sumerian Records and creator and director of Paradise City (Cameron’s last project), has joined in the fundraising efforts and proposed to match up to $50,000 in donations made to The Cameron Boyce Foundation during the campaign. The series is slated to launch later this year.

Boyce died suddenly on July 6 after suffering a seizure in his sleep due to epilepsy.

In the weeks leading up to his death, Boyce was tirelessly working on Wielding Peace, a social media campaign to help fight against gun violence, which was launched in July posthumously.

Here’s why people are Googling ‘what does antebellum mean? 0