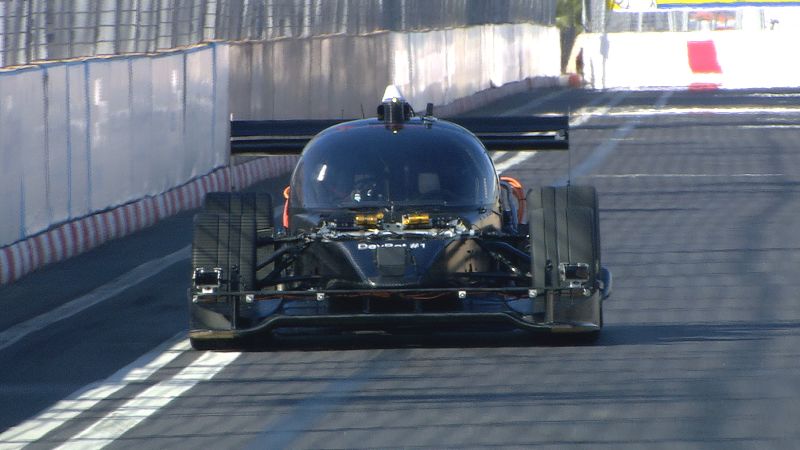 It is a car kitted out with technology its developers boldly predict will transform our cities and change the way we live.

The autonomous “DevBot #1” took a giant leap forward in Morocco recently, making its debut on a street track at the Formula E Marrakech ePrix.

The battery-powered prototype is being tested for Roborace – a proposed race series where driverless cars will compete on temporary city circuits.

“It’s the first time we’ve run the Devbot in driverless mode on a Formula E track in the middle of a city street,” Roborace’s Justin Cooke told CNN.

“It’s so exciting for the team who put hours and hours of work in. These guys were up to 1-2 a.m. in the morning developing a technology that no one else in the world is able to do at this speed and in these complicated environments.”

Using a variety of sensors – including GPS, radar and ultrasonics – allied to sophisticated computer programs, the car learns how to navigate a track at speed avoiding all obstacles.

“What we are doing is at the forefront of technology right now,” says Cooke, who is also CMO of Kinetik – an investment company founded by Russian businessman Denis Sverdlov which is providing financial backing for the project.

“There are two or three kinds of space races, if you will – some people are going to Mars, we’re developing robotic cars and I think it’s probably one of the most, if not the most exciting space in the world right now.”

After the successful 30-minute test in Marrakech – this year’s host city for the United Nations climate change conference (COP22) – Cooke say the company will next try racing two cars together on track with the eventual aim of having up to 10 cars competing at every Formula E ePrix weekend.

To be here at COP22 when we are celebrating an electric future, a driverless future – it’s the perfect time for Roborace,” Cooke enthuses.

“More than anything we want people to be excited about the technology because it’s going to change our lives, it’s going to transform our cities.”

Cirkus song Current Laga Re: Ranveer Singh feels one can do drama, thriller but comedy is something else 0