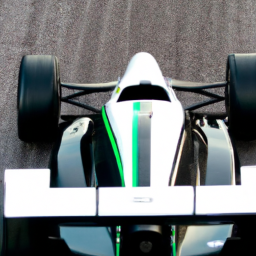 Driverless ‘Roborace’ car took to the streets of Paris recently in a world first.The autonomous Roborace car, shaped like a giant batmobile and crea

Cell phones, screens are keeping your kid awake
Grimes is selling a piece of her soul as art in online exhibition
Here is how to get your listening stats on Spotify, Apple

Driverless ‘Roborace’ car took to the streets of Paris recently in a world first.

The autonomous Roborace car, shaped like a giant batmobile and created to compete in the world’s first driverless racing series, made its debut at the Paris E-Prix last weekend.

The Roborace car was designed by racing drivers with the help of algorithms and uses a variety of sensors and software to navigate its way around the track. It is equipped with an array of cameras, radars, lidars as well as other technology to detect other competitors and obstacles on the track.

The car is also capable of making split second decisions around the track, making fast and precise turns without needing to think about its route. This makes it safer and faster than traditional racing cars.

Driverless racing has been gaining a lot of attention of late with technology firms and other companies investing in driverless car race series. Companies like Formula E are also actively exploring driverless racing and recently held an event, titled “Roborace: the Future”, in France this past weekend.

Formula E CEO Alejandro Agag said that the event highlighted the potential of driverless technology and how it could revolutionise the sport in order to make it safer, faster and more entertaining to watch.

Driverless technology is still in its infancy, however, there is a lot of potential with further development and further competitions that could see the sport get even faster and more efficient.

The debut of the Roborace car in Paris shows that the technology is rapidly improving and that driverless racing is taking steps closer to becoming a reality. With further development and investment, it could soon become a sixth racing series that races alongside the likes of Formula E and Formula One.

A driverless electric racing car has made its debut on a racing track in the streets of Buenos Aires. Developed by Roborace, the autonomous vehicle was put through its paces during the Formula E Buenos Aires ePrix, making it the first time a driverless car has been displayed in a ‘real-world’ environment.

The driverless car, known as ‘Devbot’, showed off its self-driving capabilities by competing against a ‘manned’ vehicle, piloted by veteran race car driver Lucas di Grassi. Despite the car being intended for driverless competition, di Grassi beat the car to the finish with a lap time almost a minute faster.

The Devbot vehicle is a concept car designed to demonstrate the capabilities of an autonomous racing car, and has been tested extensively in a virtual environment. The car is designed so teams can install an array of sensors and software packages that allow the car to navigate the race track without any human input.

The car is powered by four electric motors and 12 ultracapacitors, and can reach a top speed of 190mph. The car is fitted with a variety of sensors, including two cameras, four LiDAR units, five radar units and two ultrasonic sensors. It also has GPS, inertial measurement units and wheel sensors.

Roborace is a series of driverless races that is due to launch in 2016. The races will take place on city streets and other road tracks, and will feature teams of autonomous cars competing against one another.

The cars will be powered by a combination of electric motors and advanced artificial intelligence software, enabling them to navigate the race track and make decisions in real-time. Teams of engineers and programmers will compete against each other to develop the most efficient software.

Driverless cars have been around for a while now, but the Roborace series marks the first time they have been put to use in a real world environment. The series aims to challenge teams of engineers to develop and perfect autonomous racing cars, and push the boundaries of what’s possible.

It remains to be seen how successful the series will be and whether driverless cars will eventually become commonplace in motorsports, but it’s an exciting development and something that’s sure to generate a lot of interest.