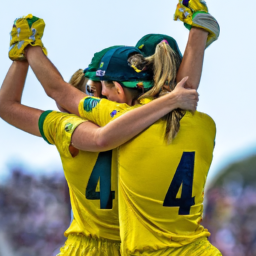 The Australian Women's Team, led by dynamic duo Ellyse Perry and Ashleigh Gardner, have triumphed in the series, defeating Sri Lanka with a dominant s

The Australian Women’s Team, led by dynamic duo Ellyse Perry and Ashleigh Gardner, have triumphed in the series, defeating Sri Lanka with a dominant seven-wicket victory in the final one-dayer in Canberra.

Ellyse Perry, one of Australia’s most talented sports stars, was in a class of her own for the series. With superb batting, bowling and fielding, Perry starred in both the Tests and the one-dayers, finishing the series as the top allrounder on both sides.

In the second Test, Perry’s superb innings of 105 helped her side to a crushing 122-run victory. During the one-day series, she was a consistent performer with the ball, picking up nine wickets in the series, and the bat, contributing her top score of 49 in the second one-dayer.

Alongside her was the evergreen Ashleigh Gardner, who contributed perhaps the most crucial performance of theseries in the second Test. Gardner’s remarkable innings of 106 not out was the backbone of Australia’s mammoth first innings score of 485 and set up the big victory.

Gardner made her mark in the one-dayers too, scoring three half-centuries with the bat and delivering some economical spells with the ball.

Perry and Gardner were just two of the many stars that shone during the series. Spinner Jess Jonassen was phenomenal throughout, claiming 11 wickets in the Tests and a further seven in the one-dayers. It was Jonassen’s four-wicket haul in the second one-dayer – including the important scalps of Sri Lanka’s top order – which set up victory for her side.

Australia can be proud of Perry, Gardner and Jonassen, whose performances helped propel their side to the series victory.

The hosts were dominant in the one-day internationals, winning all three matches. The series went down to the wire in the Twenty20 matches, but ultimately Australia’s depth in batting and bowling shone through.

This was Perry’s 10th Women’s Ashes series, and the right-hander rose to the occasion every single time, setting records for most runs and highest batting average for an Australian in the history of the series.

Her effort helped Australia amass substantial totals in all three matches, which ultimately saw them take an unassailable 3-0 lead heading into the T20 matches.

Australia entered the T20 matches with a different attitude, looking to finish the series with a flourish and there were few who did it better than Gardner.

The all-rounder was instrumental in Australia’s performance, hitting 60 and 40* in the first two T20s, which set the tone for the series. In addition, she was also economical with the ball, taking 7 wickets in her six bowling spells.

Gardner was outstanding in the field too, taking a stunning catch in the second match which completely changed the momentum of the game.

In the end, the combined efforts of Perry and Gardner proved too much for England as Australia won the series 5-0. This was a thoroughly professional performance from the Aussies and one which will be remembered for years to come.