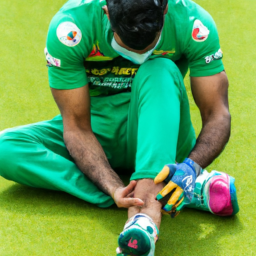 Fakhar Zaman out of T20 World Cup with knee injury

The Pakistan's opener Fakhar Zaman has been ruled out of the ICC T20 World Cup 2020 due to a knee injury. He suffered the injury while playing in the

Brendon McCullum: ‘We’ll be pushing for results. If we get outplayed, that’s okay’
Win or bust for Bangladesh and Pakistan, but even full points might not do
Zaheer and Shastri ‘don’t see any reason’ for India players to play in overseas leagues

The Pakistan’s opener Fakhar Zaman has been ruled out of the ICC T20 World Cup 2020 due to a knee injury. He suffered the injury while playing in the recently concluded Pakistan Super League in Karachi after landing heavily on his right knee.

An MRI scan of his knee has revealed a bone bruise and bone oedema. The Pakistan team management consulted his medical experts and decided to opt for further rest and rehabilitation for the star opener as an alternate to surgery.

The 30-year-old confirmed the news on his Twitter account and hoped to be fit and ready to resume international cricket soon.

The team management is currently working on a replacement of the left-handed batsman. The squad headed by Babar Azam will be hoping to find a suitable candidate who can fill in the massive hole left by Fakhar Zaman.

Fakhar Zaman has thus become the second player from Pakistan to be ruled out due to injury ahead of the World Cup. Senior bowler Mohammad Amir had announced his retirement last month citing mental burnout.

The ICC T20 World Cup is expected to offer perhaps the biggest opportunity to teams of the subcontinent to make an impression on the world stage and perform to their best. Unfortunately, Pakistan will have to do it without the experienced Fakhar Zaman, who featured in all the team’s recent T20 series.

His absence will be a big disadvantage to Pakistan and the tournament will certainly suffer a lot without the premier batsman’s presence. Let’s hope the injury heal quickly and Zaman makes a full recovery in time for the upcoming T20 league’s across the world.

Pakistan Cricket fans were left shocked as one of the most dependable players of the team, Fakhar Zaman, has been ruled out of the T20 World Cup due to a knee injury.

Fakhar suffered a ligament tear during a training session on the outskirts of Lahore, leading him to be ruled out of the tournament. Zaman had been in poor form lately, having failed to score a single half-century in the past two T20I series. Despite that, he still found himself at the centre of Pakistan’s batting lineup.

The injury has put the selectors in a difficult position as they have to choose a replacement at the last minute. The team is expected to select either Babar Azam or Fakhar Zaman’s fellow opening batsman Ahmed Shehzad to take his place in the squad.

Impact of this InjuryWhat are the Likely Replacement for Fakhar Zaman?

It will be interesting to see how the team copes with the absence of one of their most dependable batsmen, but for now all that is known is that Fakhar Zaman is out of the tournament due to his knee injury.

Loading...
Newer Post
Australia look to shut out the noise as West Indies face 25 years of history against them
Older Post
Steve Waugh: ‘The public has almost overdosed on cricket’

Stephen Fleming: Pakistan made a ‘massive mistake’ in the death overs 0