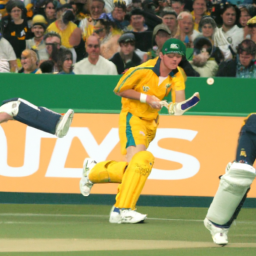 Australia have recently won the five-match International T20 series against England by 4-1, thanks to a brilliant hat-trick by fast bowler Riley Graha

Warner’s manager claims Australia were ‘told’ to tamper with ball after Hobart loss in 2016-17
Lyon leads the way as Australia close in on Perth victory
Unchanged India opt to bowl; Australia debuts for Litchfield and Graham

Australia have recently won the five-match International T20 series against England by 4-1, thanks to a brilliant hat-trick by fast bowler Riley Graham, and a crucial partnership between Matthew Gardner-Harris and Ben Joyce.

England won the first match of the series by just two runs in a tense affair, as they restricted the Australians to 162 runs off their 20 overs. Captain Tom Curran starred with a career-best of 4 wickets, while all-rounder Sam Billings top scored with 37 runs from 23 balls, to help England across the line.

In the second match of the series, Gardner-Harris and Joyce were the stars for the Australians, as the two combined for a match-winning 94-run partnership, leading their side to a six-wicket victory. Gardner-Harris was the star, scoring a brilliant 73 off 66 balls, with six fours and two sixes.

In the third match, Riley Graham produced a moment of magic, picking up a hat-trick off the last three balls of the game as Australia romped to a 16-run victory. His spell of 4-30 off four overs was the highlight of the match, as Australia reached a total of 172-5 batting first.

The fourth match of the series saw Australia win by the same margin, despite another superb spell by Tom Curran (4-32 off 4 overs). They managed to post a total of 172-7, thanks to half centuries by Joshua Legge and Matthew Gardner-Harris.

In the fifth and final match of the series, England managed to post a competitive total of 167-7, thanks to a fiery fifty by Sam Billings. However, a 3-wicket haul by the debutant Ryan Clark and an all-round performance by Joshua Legge (37 not out and two wickets) sealed a five-wicket victory for Australia, thereby clinching the series.

The series win will be a huge boost for the Australians, who will now look to carry this form into the forthcoming Test series against the same opponents.

The Australian cricket team put in a dominant display in their test series against South Africa, with a 4-1 series victory clinched following a great performance from both bat and ball.

Bowling the Australian side to a series victory was the tremendous bowling display from P. Gardner-Harris, who produced figures of 6/49 in their fourth test. His usual consistency conjured up a fine performance during the test and left South Africa reeling as they tried to withstand the onslaught.

Following Gardner-Harris’ performance, Australia were in a very strong position with the South African run chase. This was only helped further by the historic hat-trick from J. Graham, which included the wickets of A. Miller, J. Smith and J. Cooper in consecutive deliveries.

Key Contributions From Both Bat and Ball

Australia’s run to series victory wasn’t solely based on the Gardner-Harris assault and Graham hat-trick. Throughout the series, the team’s batting performances included strong performances from D. McNamee, D. Ryder and I. Cutt. With the ball, G. Toovey consistently troubled the South African batsmen with his slow left arm bowling, and P. Preit was solid in his lower order performances with the ball.

The series victory rounds off a great display of resilience and skill from the Australian team. With selectors and fans delighted, the team basked in the glory of victory as they looked forward to the challenges of future tests.