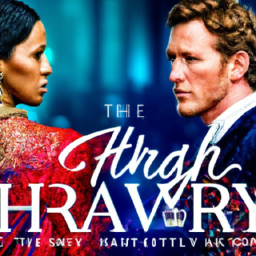 Prince Harry and Meghan Markle’s highly awaited series, “Harry & Meghan: A Royal Romance,” is set to release on May 13. Produced by Lifetime films, the series will premiere new trailers Saturday. It follows a romantic timeline that begins just as Meghan and Harry meet to the much-talked-about royal wedding that happened on May 19, 2018.

The series is a two-hour film that is produced as a “love story for the ages,” and has been produced by chief Stephanie Herren. Cast members include actors Murray Fraser as Harry and Parisa Fitz-Henley as Meghan, along with recognizable actors from across the pond, including: Bonnie Soper as Doria Ragland, Harry and Meghan’s mother, and Charles Shaughnessy as Thomas Markle, Meghan’s father.

The series highlights the California native Meghan as a “rags to riches” woman finding her place in a new country, and a way to be seen and accepted in the British Royal Sphere. It is set to pour out plenty of drama in a sometimes scandalous life that Meghan is not always familiar with, a roller coaster of events that brings them to their final destination, marriage.

The show is set to provide a more intimate perspective of the couple, both before and after they were engaged. It gives viewers a chance to understand how supportive their foundation was, how they managed their celebrity status, and how their inner circle of friends invested in the opportunity to bring an outside story to The Royal Family.

As the release date draws near and the trailer premieres, viewers are sure to fall in love with the same thing that Harry and Meghan did four years ago: a love story for the ages.

An upcoming limited series to the royal family, ‘Harry & Meghan’ is set to release in May 2021. The series will be an intimacy look into the love story of Prince Harry and Meghan Markle, from the moment they met to their eventual departure from the royal family.

The series will premire in the UK on Sunday May 16 2021 at 19:30 on Lifetime. The episodes will then be available to stream exclusively on StarzPlay.

A new trailer for the series has been released, which you can view here:

The series is executive produced by Lindsay Goldstein, Jenny Halper, and Gwyneth Horder Payton. The storyline is said to “illuminate the possibilities and the pressures of embracing both sides of their true selves.”

The series sure to be a hit with fans of Meghan Markle and the royal family alike. Be sure to mark May 16th in your calenders, and get ready to get an intimate look into Prince Harry and Meghan Markle’s relationship.

What parents should know about the VR gear kids want 0

Flying a sports car with wings 0