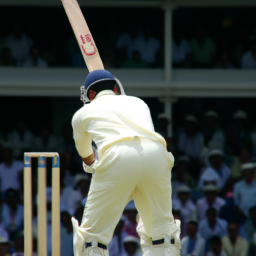 Head 78* as Australia edge ahead on 15-wicket opening day

On the 15th of December, the first day of the third and final test match between Australia and India saw Australia take a commanding lead. In a nail-b

On the 15th of December, the first day of the third and final test match between Australia and India saw Australia take a commanding lead. In a nail-biting day of cricket, Australia lost only five wickets, amassing a total of 278 runs thanks to their opener, Mathew Renshaw’s Hectic 78*.

The start of the day saw the Indian team opt to bowl in the forlorn hope of taking an early lead in the series. However, their plans were disrupted by an opening batting partnership between Renshaw and captain Steve Smith, who delivered a stellar performance by scoring a 56 run partnership. Renshaw then continued on to complete his first test whole century, scoring exactly 78, taking his team to a total of 188/2 in their first innings.

Afterward, the Australian side continued their dominance, with strong contributions from Peter Handscomb and Mitchell Starc who scored a further 90 runs between them.

Meanwhile, the Indian team’s performance improved towards the later afternoon with the bowlers working hard to chip away at the Australian ranks and ending the day on 278/5, a promising start in the series for India.

The second day of the game is poised to show a different picture, and will soon determine which team will have the upper hand in the series. Once again, Renshaw will be the key contributor and his performance will be difficult to beat.

On a captivating opening day of the test match at Head 78 Australia have edged into the advantage after an incredible display of bowling and batting heroics.

The Australian team delivered an incredible bowling performance, limiting their opponents to just 153 runs. This being a 55 stay lower than their own total of 208. Special mention must go to Jhye Richardson for his masterful 5 for 26 and Mitchell Starc for adding three top-class wickets to his collection.

As the day closed the Australian side closed with a lead of 55 runs on the opening day. This was after the great batting effort of Steve Smith, who ended the day with an unbeaten 73, and David Warner who weighed in with a solid 30.

With the one-sided opening day, and Australian in the ascendancy, the likelihood of Day 2 turning out totally different is quite remote. We think Australia will strive to cement their current advantage:

Head 78 has been a great day 1 of cricket and one that the Australian side will certainly look back on fondly. We can expect a similar outing in the remaining four days.

What parents should know about the VR gear kids want 0