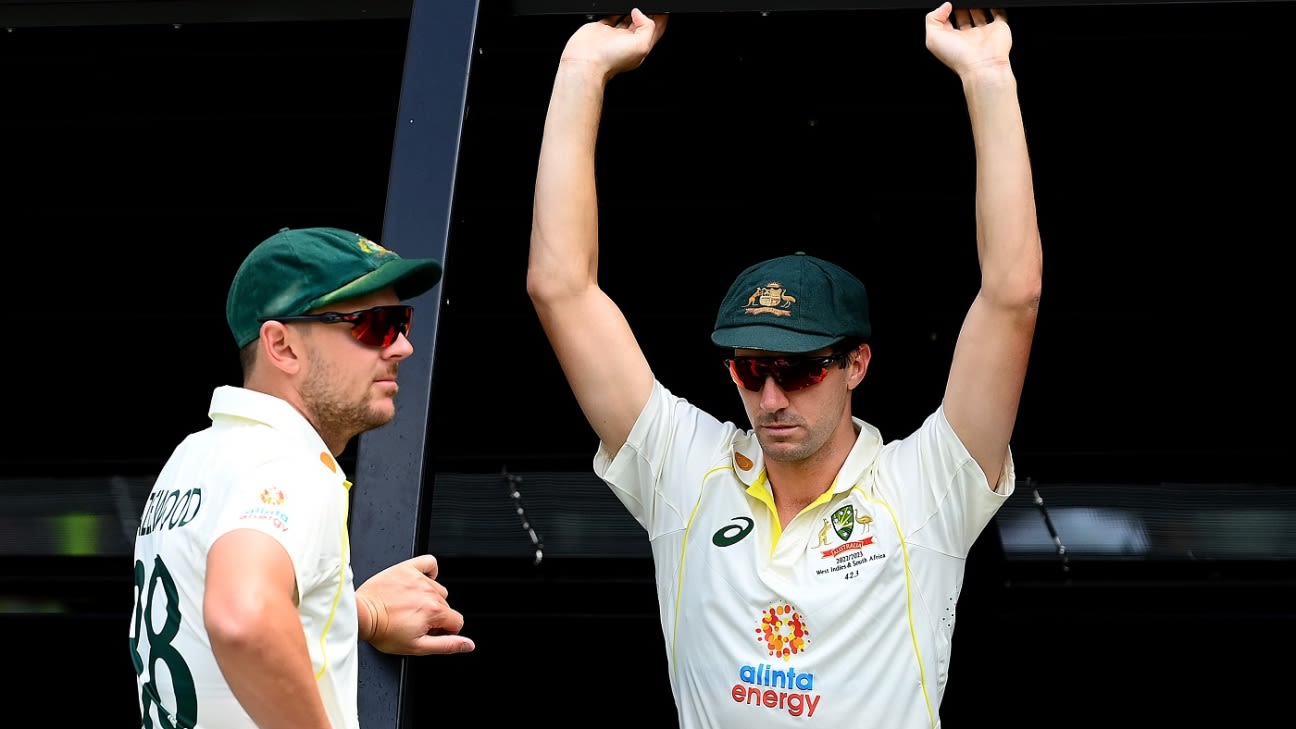 Australia have been made to toil against defiant batting, but claimed three wickets in the middle session as they eyed taking the second new ball after tea.

West Indies’ hopes of eating into the sizeable deficit revolves largely around Jermaine Blackwood and Shamarh Brooks, who was substituted into the match after No.3 Nkrumah Bonner was ruled out with concussion.

Bonner, who had looked composed making 16, was hit on the helmet by a Cameron Green bouncer in the first session and batted for another 40 minutes before retiring hurt.

A gutsy West Indies have sought a resolute approach in a far cry from England’s ballistic batting against Pakistan in the concurrent Test match in Rawalpindi.

Heading into the match, West Indies had set a target of batting at least 100 overs which they are set to achieve on a pitch that hasn’t produced fireworks so far.

But Australia’s quicks have conjured steep bounce and occasional movement off the seam as they’ve been made to work against a West Indies rearguard.

West Indies captain Kraigg Brathwaite looked set to bat for the long haul but his 166-ball resistance ended after lunch when he was bowled by a pearler from Cummins, who claimed his 200th wicket in style.

Playing his 44th Test, Cummins’ became the fifth fastest to the landmark by an Australian behind only Clarrie Grimmett (36), Dennis Lillee (38), Stuart MacGill (41) and Shane Warne (42).

Cummins summoned a mighty spell after lunch to prove there was some spice lurking in the much-discussed surface at Optus Stadium. He inspired others with Mitchell Starc rewarded by hitting the top of Kyle Mayers’ off stump as Australia sensed making their move.

The hosts thought they had another when Jason Holder was given out lbw on 6 by a full and straight Josh Hazlewood delivery. But he was reprieved when replays showed there was a faint inside edge.

Holder settled after the reversal hitting a gorgeous straight drive to the boundary then slog-swept spinner Nathan Lyon for six. But Lyon had revenge shortly after with Holder snaffled at leg slip as West Indies’ long resistance was threatening to break.

West Indies had lost only debutant Tagenarine Chanderpaul in the morning session as they continued their long haul back into the opening Test after Australia made a massive 598 for 4 declared in their first innings.

There was much excitement over Chanderpaul, the son of legendary batter Shivnarine, after his gutsy and at times cavalier approach the previous evening to defy Australia’s aggressive bowling.

Having survived a short-ball barrage in a tough initiation, including being hit several times on the body, he reached his half-century after edging Hazlewood through the slips for a fortunate boundary.

But Chanderpaul fell on the next delivery to end an impressive 79-ball knock.

After Australia’s quicks targetted a short length late on day two, which proved unsuccessful against the disciplined West Indies openers, they reverted to hitting good areas in a bid to challenge the forward defence.

Green, who in his home Test debut did not get a chance to bat in Australia’s first innings, entered the attack 30 minutes into the day’s play and used his towering height to devastating effect as Bonner can attest.

Australia’s vice-like grip on the contest tightened as the Test, the first between the countries since January 2016, passed its halfway point.

Will the next iPhone charge wirelessly? 0

CDWP approves Rs133b worth of projects 0