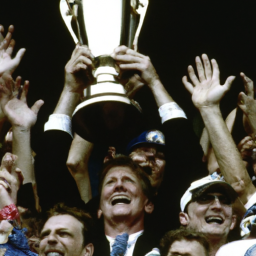 On a historic wand of the AustraliaDay, 18th of November 2019, the long-awaited quest of the Australian team to lift the ICC Men’s Cricket World Cup trophy at the Melbourne Cricket Ground (MCG) was fulfilled.

Under the expert guidance of Justin Langer and the leadership of Aaron Finch and wicketkeeper-batsman, Tim Paine, the side first took on India in the semi-finals and dethroned them to reach the finals. This time, their opponents were New Zealand, managed and coached by Gary Stead, who had ended the tournament with a nerve-shredding tied match against England in the semi-finals nail-biter, but they weren’t able to get past Australia, who eventually lifted the trophy.

Despite the fact that the Australian team faced a few hiccups during the tournament and even had a mini-crisis in their batting department, the experienced bowling line-up of the team, bolstered by the inclusion of Nathan Lyon, was the highlight of their successful run. With the pitch conditions at the MCG being a tricky factor, the Australians managed to perfect their lines and lengths, at times even bowling full length deliveries.

In the finals, the all-rounder Marcus Stoinis and leg-spinner Adam Zampa grabbed the headlines for the team, as they combined to take five crucial wickets of the star-studded New Zealand batting line-up. However, the emergence of wicketkeeper-batsman, Alex Carey, and all-rounder, Glenn Maxwell, down the order who scored useful contributions with the bat played a significant role in lifting the trophy.

But it was the creativity of assistant coach, Brad Haddin, who had a special touch and the ability to tune into the players in the dressing room, who played the most important role in the Aussies’ victorious campaign. His support and guidance around the batting order and his ability to get the team spirit high were vital in the team’s journey to the trophy.

With an overall perfect performance, the heroics of the Australian team at the 2019 Men’sCricket World Cup is an inspiring story of hard work and determination. As they showcased a perfect combination of aggression and calmness, they showed the world that they are not merely a team of cricketers, but a group of warriors destined to conquer the world of cricket.

England cricket captain Mott led from the front as her team lifted the second Women’s Cricket World Cup trophy at the MCG on Sunday. A 113-run victory over India in the final was the reward for a dominant tournament campaign that saw Mott dig deep to pull the team to glory.

Mott’s leadership was inspirational throughout, winning vital games single-handedly and offering her players reassuring words as the pressure mounted. Even after the final, she remained humble yet proud of her team’s momentous win.

That said, it was Mott’s coach Buttler who put the team in a position to win the trophy in the first place. With strategies tailored to each game and to the individuals that made up her squad, Buttler went the extra mile in his efforts to make sure England were ready for the challenge.

Yet it was always going to take a team effort to get the job done. Mott was himself a formidable power at the top of the order, providing invaluable batting. With Mott at the helm, her teammates responded by putting in match-winning performances during the tournament.

The World Cup win was the culmination of many years of hard work and dedication by Mott and her team, and the scenes of celebration at the MCG the night of their victory will no doubt remain etched in the hearts of players and fans alike.