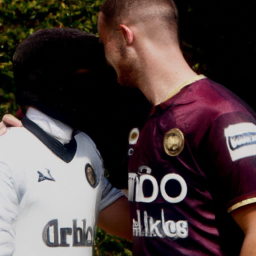 On Monday, it was announced that Surrey batsman Ollie Pope would be England's new wicketkeeper for the upcoming Test series against India. With this a

On Monday, it was announced that Surrey batsman Ollie Pope would be England’s new wicketkeeper for the upcoming Test series against India. With this announcement, the 22-year-old comes into the squad to replace Ben Foakes, who has been a crucial component of the English team since his debut in 2018. In spite of the unexpected shift, Pope has revealed that there is no bad blood between him and his predecessor.

Pope is one of England’s most promising young prospects, having represented his country at the U-19 level. His debut in the senior team came against India in 2018, where he scored a quick-fire 33 off 39 balls in a T20I match. Since then, he has gone from strength to strength, becoming an integral part of the batting line-up for both Surrey and the England Lions.

In the press conference that followed his surprise selection, Pope was asked about the situation between him and Foakes, to which he replied, “There’s no animosity at all. It was nice to get a call from Foakesy the other day to congratulate me on the news.” He added, “It’s a moment I will never forget. Ben is obviously a great player and I have learned a lot watching him.”

Pope even went on to praise Foakes’ abilities as a batsman, stating that “The way he has adapted his game to Test cricket has been fantastic, and he has been an integral part of England’s success in the past few years.”

Surrey’s skipper Rory Burns was overjoyed on his teammate’s callup to the English side, stating in his tweet that he is, “Really pleased for Ollie (Pope) to get the chance to fulfill another childhood dream of his.”

Pope’s selection as England’s wicketkeeper is sure to be beneficial for the side. It is encouraging to see the camaraderie between the two players, especially with both being in competition for the same spot. This is certainly a sign of the team’s determination to put the country before any personal preferences.

Throughout the third Test match between England and Pakistan at the Ageas Bowl, there was an unexpected twist in the tale which saw debutant Ollie Pope switch from batsman to wicket-keeper. With the successful inclusion of Ben Foakes as the principle keeper in England’s squad, Pope stepped in as a secondary keeper to give the physical relief to Foakes who had kept wickets for both innings.

Although this gave Pope the opportunity to demonstrate his keeping skills and demonstrate his versatility, it raised some questions about what this meant for Foakes. Fortunately, Pope has stated that this switch resulted in no animosity between himself and Foakes.

Speaking to media, Pope said “It was somebody else’s chance and Ben Foakes was allowed to have a break. I wasn’t going to argue with it! I just want to do whatever I can for the team, so whatever job I’m asked to do, I’ll do that, and the same goes to Ben. We just want the best for the team and for England, so that’s it.”

Joe Root, the England captain praised the professionalism of both Pope and Foakes in this unexpected situation and further commented on how it is a testament to how well the team is operating.

This match’s turning point was the hat-trick scored by Pope with his part time keeping. Subsequently, Pope emerged as the man of the match and was praised for his outstanding performance.

Pope has been in dominant form in all three Tests and has been a great asset to the England side. His first innings debut saw him score 75 runs and followed in the second innings with 30 to make it a match total of over 100 runs.

No doubt Ollie Pope and Ben Foakes have both shown amazing sportsmanship in the wake of this unexpected opportunity. With Pope’s immense skill demonstrated in the match and the adaptability shown by both, Pope and Foakes are sure to have imperative roles for the rest of England test series against Pakistan.

Machine Gun Kelly says he has ‘waited for eternity’ for Megan Fox, confirming their relationship on Instagram 0