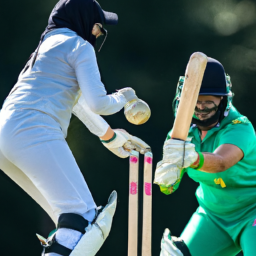 Pakistan made a statement in their opening match of the Women’s Twenty20 series against Ireland with a convincing 6-wicket win.The Pakistan side, po

Pakistan made a statement in their opening match of the Women’s Twenty20 series against Ireland with a convincing 6-wicket win.

The Pakistan side, powered by a historic century stand between Sidra Ameen and Bismah Maroof, posted a dominant victory over the Irish in the first match of a double header at the Free Foresters Sports Club in East Molesey, England.

Ameen and Maroof forged a 114-run third-wicket partnership to lift Pakistan from a precarious 52-2 after seven overs, to 166-3 at the end of the innings. The New Zealand-born Ameen’s unbeaten 81 off 66 balls showcased some attacking batting. She was ably supported by Maroof, who scored 38 off 40 balls. The team closed out the match at 166-5 in 19 overs.

In response, Ireland looked to threatening innings from their batting order to challenge the total. However, an economical bowling performance from the Pakistani attack tied Ireland down to 134-8 in 20 overs. Diana Baig, who finished with figures of 4W/27 runs, was a standout performer for the Pakistan bowlers.

Pakistan’s victory in the opening match of the series adds to the nation’s growing success in international women’s cricket. With such a convincing win over Ireland, the team will be looking to continue the momentum of the series with their next match against South Africa.

Pakistan’s women cricket team have defeated Ireland in an impressive match by eight wickets. The team was led by captain, Bismah Maroof, and her opening partner, Sidra Ameen.

The match began shortly after 4pm in Ireland with Pakistan winning the toss and opting to bowl first. Ireland put up a score of 152-7, thanks to some strong batting from Lucy O’Reilly (51) and Shauna Kavanagh (36). However, this wasn’t enough to prevent Pakistan from claiming victory.

Pakistan went into the match with a strong line up featuring Sidra Ameen and Bismah Maroof – both of whom had excellent performances. Veteran opener, Ameen, scored her first ODI half-century in Pakistan’s second match of the series. She finished the match with a total of 83 runs. Maroof, captaining the Pakistan side, scored a brave 30 not out, showing her composure under pressure.

Pakistan have enjoyed a fantastic tour of Ireland, winning all five of their matches, despite having relatively limited training and preparation time. They have also beaten Bangladesh and Netherlands in the quadrangular series and have secured a place in the final, which is to be played on the 26th of June.

The team’s impressive performance has been instrumental to their success, with a number of star players:

The team are now looking forward to the 2021 ODI World Cup in New Zealand, where they will be aiming to continue their impressive performances.