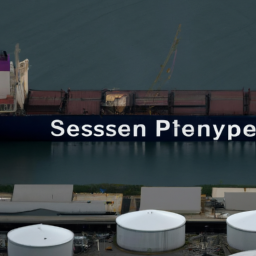 Singapore’s sovereign wealth fund Temasek Holdings is considering a multi-billion dollar exit from Hutchison Ports, the world’s largest port operator, according to a report from Reuters.

The news agency cites sources familiar with the matter, who disclosed that PSA International, a subsidiary of Temasek, is in the process of getting ready for a possible Initial Public Offering (IPO) of Hutchison Port Holdings Trust. In a move to potentially raise $5 billion, the company is said to have obtained advisers in preparation for the possible exit.

PSA, which is the world’s second-largest ports operator, currently holds a 52% stake in the Hong Kong-based container port trust. By listing the trust, PSA would be taking advantage of the increasing investor demand for infrastructure-related investments following a prolonged rally in the stock markets. Furthermore, the trust holdings would provide investors with direct exposure to cargo and container volumes, which have been on an uptrend due to the ongoing pandemic.

Although there has been no official confirmation from either company, the report by Reuters suggest that this move could be an integral step toward unlocking the value from PSA’s $8.7 billion investment in Hutchison Port Holdings Trust.

If successful, this move will be one of the most prominent exits by Temasek in recent times. The Singapore-based holding company has made headlines for its astute investments and exits, having cashed out on its stake in Tesco’s Thai subsidiary Tesco Lotus and sold its shares in chipmaker Broadcom Inc. in the past.

According to Reuters, Temasek’s PSA Group revealed its intention to exit its stake in the ports giant on Tuesday. The Group started looking into a potential sale of its one-third stake held in HPH due to the increasing tension between Hong Kong and China.

PSA has already attracted bids from potential buyers, both from China and elsewhere. Reports from people with knowledge of the matter state that companies such as China Merchant Port Holdings, Shanghai International Port Group and Greenland Holdings Group have expressed their interest in PSA’s stake. Estimates place the stake’s worth at roughly US$5.38 billion.

Temasek Holdings, which controls PSA International, has remained tight-lipped regarding the potential exit. PSA’s stake in Hutchison Port Holdings is one of its most valuable investments, with the Chinese ports giant accounting for close to one-fifth of the Group’s consolidated assets. As such, PSA has not confirmed or denied the possible exit.

Despite the silence, it is clear that Temasek is looking to maximize the value of its stake by exiting the company now. The tensions between China and Hong Kong have put HPH’s future in uncertainty. PSA had initially entered into the joint venture back in 2011, and it looks like it may be time for them to take their leave.

This move by PSA could signal a major decline in Singapore’s investment presence in China. As one of the biggest foreign investors in China, any exit by PSA could lead to a larger exodus of Singaporean investments away from the country.

What Does the Future Hold?

Only time will tell what the outcome of PSA’s potential exit from HPH will be, but it is clear that it will have a major impact on both Singapore and China. PSA has already attracted several potential buyers, so the future of the Group’s stake in HPH is looking promising.

Only time will tell what the future holds for PSA’s investment in HPH, but it is clear that Temasek Holdings is looking to maximize the value of its stake.