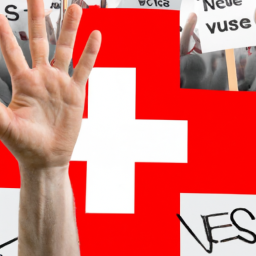 On Sunday, Swiss voters rejected a proposal to overhaul the nation’s corporate tax system in a referendum. Almost 65 percent of the electorate voted a

On Sunday, Swiss voters rejected a proposal to overhaul the nation’s corporate tax system in a referendum. Almost 65 percent of the electorate voted against the proposal, which would have replaced the current system with a low flat-rate corporation tax.

The proposal, put forward by the Liberal Green party, called for the elimination of special tax schemes for foreign companies operating in Switzerland and the introduction of a corporate tax rate of 8.5 percent for most companies. The low flat-rate was intended to attract more foreign businesses and investments to Switzerland. Supporters of the proposal argued that it would have increased the tax revenue of the country, provided more funds for education and research, and promoted economic growth.

Opponents of the proposal argued that it rewarded large companies and multinationals at the expense of the small and medium sized businesses. They said the proposed flat tax would have disadvantaged small companies who, despite creating a significant number of jobs, would no longer be entitled to the special tax scheme they currently benefit from.

The Swiss government welcomed the result of the referendum, saying it would stick to the existing corporate tax system. Finance Minister Ueli Maurer stated: “The Swiss economy needs stability, predictability and competitive corporate taxes,” and added “We can now concentrate again on other urgent issues.”

The result of this referendum clearly shows the Swiss people’s intention to protect the interests of small and medium sized businesses. However, with a corporate tax rate that overall is higher than in many other countries, the Swiss government may have to revisit the issue of corporate tax reform in the near future.

The proposed tax overhaul had been put forward by Swiss business group Economiesuisse and was aimed at reducing the overall tax burden on companies and improving their international competitiveness. However, the majority of Swiss voters rejected the proposal, after a recent survey showed that many were concerned that the overhaul would result in a decrease in public services, such as education and social welfare.

There are several reasons why Swiss voters rejected the proposal to overhaul the corporate tax system:

In conclusion, the Swiss voters rejected the proposed corporate tax overhaul, due to a combination of public mistrust of the government, the potential for job losses, and the cost of such an overhaul. The government must now go back to the drawing board and come up with an alternative solution that will benefit both businesses and citizens alike.