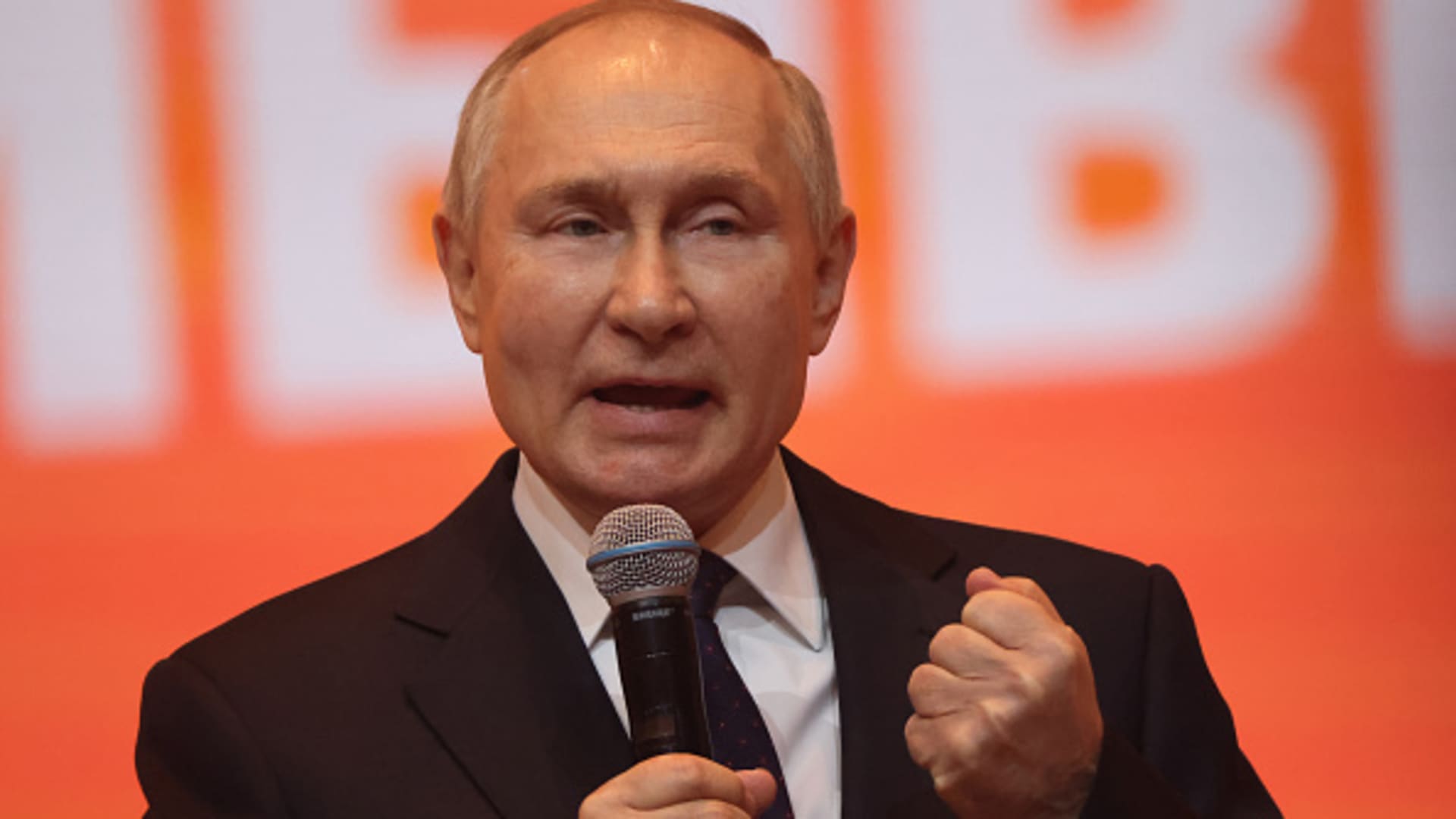 Ukraine facing 'significant' power shortages, grid operator saysEmergency power shutdowns have been implemented in Ukraine on Thursday as the national

Emergency power shutdowns have been implemented in Ukraine on Thursday as the national power operator struggles following repeated Russian bombardment on the country’s energy network.

“As of 11:00 a.m. on December 8, because of damage caused by missile strikes to power plants and the high-voltage network, the system has a significant shortage of electricity,” grid operator Ukrenergo said on Telegram.

Consumption limits had already been exceeded in several regions and emergency shutdowns were applied this morning, Ukrenergo said. Earlier this week, Russia launched a new wave of missile attacks once again targeted at its energy infrastructure, a move designed to add inflict more hardship and discomfort on Ukrainian people as freezing temperatures set in.

“The situation is complicated by weather conditions: in many regions in the west of the country, frost, rain with snow and strong gusts of wind cause icing of wires and their damage,” the company said.

Local residents charge their devices, use internet connection and warm up after critical civil infrastructure was hit by Russian missile attacks in Kyiv, Ukraine, on Nov. 24, 2022.

Eastern Ukraine, where fighting is at its most intense, is facing the most difficult situation after Russian forces “subjected several districts to massive artillery shelling.”

“Where the situation allows, an examination of the state of the power grid is carried out. After receiving permission from the military, repair work will begin,” Ukrenego said. Emergency repair work continued around the clock in the regions of Kyiv and Odesa, it said.

“Zelensky knows when all this can end, it can all end tomorrow if [Kyiv] wishes,” Russian Presidential Press Secretary Dmitry Peskov told reporters Thursday.

The Kremlin claimed the war in Ukraine could end immediately if Kyiv has the political will to do so.

“Zelensky knows when all this can end, it can all end tomorrow if [Kyiv] wishes,” Russian Presidential Press Secretary Dmitry Peskov told reporters Thursday.

Ukraine has said it will no conduct cease-fire operations with Russian while Russian troops remain on its territory and while President Vladimir Putin is in power.

Russian warships are seen ahead of the Navy Day parade in the Black Sea port of Sevastopol, Crimea July 23, 2021.

Russia’s fleet shot down a Ukrainian drone over the Black Sea, the Russian-installed governor of Sevastopol, the largest city in the annexed Crimean peninsular, said on Thursday.

“This morning, a ship of the Black Sea Fleet shot down a UAV over the sea,” Sevastopol Governor Mikhail Razvozhaev said on Telegram.

Reuters was unable to immediately verify battlefield reports from either side.

“First of all, regarding the Donetsk region, Bakhmut districts and other hottest spots. A very fierce confrontation is ongoing there, every meter counts. I thank all our guys who destroy the enemy right there – every day, every night, every hour,” Zelenskyy posted on Telegram Wednesday after meeting with the military’s leadership. On Tuesday, Zelenskyy visited troops on the front line in Donetsk.

He said fighting in the neighboring Luhansk region, as well as the northeastern Kharkiv region, was discussed, as well as the acute crisis Ukraine’s energy system faces.

“We are constantly increasing the generation and supply of electricity – we are adding more volume almost every day,” Zelenskyy said, although the country’s armed forces warned Thursday that “the threat of Russian missile attacks on Ukraine’s energy system and critical infrastructure remains.”

Smoke and flames rise after many missiles and artillery shells fell in the area, in the Voroshylovskyi district of Donetsk, Ukraine, on Dec. 6, 2022. According to initial reports, there were people killed and injured in the attack that severely damaged civilian settlements.

The General Staff of Ukraine’s armed forces noted on Facebook that while other regions in Ukraine are coming under attack, Russian forces continue to concentrate their assaults on Donetsk and Luhansk in eastern Ukraine.

“Over the past 24 hours, units of the defense forces have repelled attacks by Russian invaders outside the settlements of Ternova, Kharkiv Region; Stelmakhivka, Ploshchanka, Chervonopopivka and Bilohorivka, Luhansk region, and Bilohorivka, Berestove, Yakovlivka, Bakhmutske, Bakhmut, Opytne, Kurdiumivka, Maiorsk, Marinka, and Novomykhailivka, Donetsk region,” the report said.

Kyiv’s mayor on Wednesday warned of an “apocalypse” scenario for the Ukrainian capital this winter if Russian air strikes on infrastructure continue and said although there was no need for people to evacuate now, they should be ready to do so.

“Kyiv might lose power, water, and heat supply. The apocalypse might happen, like in Hollywood films, when it’s not possible to live in homes considering the low temperature,” Mayor Vitali Klitschko told Reuters in an interview.

“But we are fighting and doing everything we can to make sure that this does not happen,” the former world heavyweight boxing champion said, raising his booming voice to drive the point home.

According to Klitschko, 152 civilian residents of Kyiv have been killed and 678 buildings destroyed since the beginning of Russia’s invasion on Feb. 24, but the city faces fresh tribulations this winter as Russia regularly pounds Ukraine’s power grid with missiles.

European Commission President Ursula von der Leyen speaks during a media conference at the EU-Western Balkans Summit, in Tirana, Albania, Tuesday, Dec. 6, 2022. EU leaders and their Western Balkans counterparts gathered Tuesday for talks aimed at boosting their partnership as Russia’s war in Ukraine threatens to reshape the geopolitical balance in the region.

The European Union proposed travel bans and asset freezes on almost 200 more Russian officials and military officers as part of a new round of sanctions aimed at ramping up pressure on Moscow over its war in Ukraine.

The proposals were made by the EU’s executive branch, the European Commission. They must still be debated and endorsed by the 27 member countries, a process that routinely results in the commission’s suggestions getting watered down.

The targets of the latest recommended sanctions include government ministers, lawmakers, regional governors and political parties.

“This list covers key figures in Russia’s brutal and deliberate missile strikes against civilians, in the kidnapping of Ukrainian children to Russia, and in the theft of Ukrainian agricultural products,” European Commission President Ursula von der Leyen said in a statement.

With a fresh raft of sanctions, the commission also intends to target the Russian defense industry and more Russian banks, and to impose export controls and restrictions on products like chemicals, nerve agents, electronics and IT components that could be used by the armed forces.

Putin says Russia’s war could be a ‘lengthy’ process, downplays the need to mobilize more troops

Russian President Vladimir Putin said his invasion of Ukraine could be “lengthy,” as the brutal conflict drags into its 10th month.

As Russia struggles to hold ground it gained this year in Ukraine, Putin downplayed the need to mobilize more troops. Considering another round of conscription “simply does not make sense,” Putin said, according to an NBC News translation of his remarks at a meeting of his human rights council.

Of the 300,000 reservists called up during Putin’s partial mobilization earlier this year, 150,000 are now in Ukraine, the Russian president said.

He added that “there is no mass withdrawal” from Russian positions in Ukraine.

Ukrainians brace for a long winter ahead

Kyiv residents brace for a cold, dark winter as Russia continues its missile strikes that have caused widespread power outages across the country.

Citizens are seen making their way through snow on December 07, 2022 in Borodyanka, Ukraine.

A resident collects water from a pump in Kyiv, Ukraine, on Tuesday, Dec. 6, 2022. Ukrainians have been no strangers to hardship over the past century, but their dogged resilience and solidarity in the face of Russian bombardment has been an enduring image of a war that started at the tail end of last winter. Photographer: Andrew Kravchenko/Bloomberg via Getty Images

Woman seen near an artwork by British street artist Banksy on December 07, 2022 in Borodyanka, Ukraine.

People walk down a street amid a snowfall as Russia’s invasion of Ukraine continues, in central Kyiv, Ukraine December 7, 2022.

Civilians take shelter in a metro station during an airstrike alert in the centre of Kyiv on December 5, 2022, amid the Russian invasion of Ukraine.

A resident lights a camping stove at home during a power outage in Kyiv, Ukraine, on Tuesday, Dec. 6, 2022.