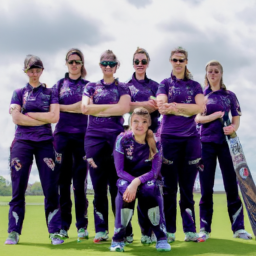 The local Nottinghamshire women’s cricket team has recently moved from the Loughborough University grounds to the Trent Bridge cricket ground with an exciting new name. Following months of consultation with local supporters, the regional squad will now be known as ‘The Blaze’.

The move to Trent Bridge is expected to provide a much better platform and improved facilities for the team, as they look to build on a successful past couple of years.

The team’s Head Coach, Adam Kennedy, says that the move to the broader Nottinghamshire region will bring more fans and supporters to the ground as a base for their activities.

“This move opens up a lot of potential opportunities for us to really build and develop the team going forward. Being affiliated with Trent Bridge will give us access to first-class facilities and state-of-the-art equipment. Also, being based in the wider community means that more people will be aware of the group and will potentially come out to supports the games.”

The team’s manager, Kelly Cunliffe, was also enthusiastic about the move to the new ground and the associated name change.

“The new title ‘The Blaze’ is a great fit for us, as this symbolizes the burning passion and energy that our team aspires to bring. I am looking forward to the new facilities, which are expected to help enhance our performances on the field,” commented Cunliffe.

The team’s senior players have also expressed their excitement and have high hopes for the move. Sophie Mcpherson, a senior player in the squad, believes that the relocation to Trent Bridge will bring about a renewed energy throughout the team and create an exciting future for the team.

“We as a team have worked hard thus far, and I feel that this move to a more professional and established first-class ground will be instrumental in our progress over the next few years,” applauded McPherson.

The group has, therefore, made a major shift ahead of the 2021 season. The team, which was previously known as ‘The Lightening,’ will now call themselves ‘The Blaze’, as they embark upon their journey to Trent Bridge cricket ground.

Trent Bridge and Notts Cricket announced the new name for the club’s regional women’s team: The Blaze – following the move of the team’s base and home matches to Trent Bridge.

Background of the Move

The team has previously been based at Loughborough and it is moving to Trent Bridge to ensure the team has a permanent home in Nottingham. The tourney is expected to be a great boost to the region and its cricketing prospects.

Following the move the newly named team ‘The Blaze’ has been formed. The name captures the true spirit of regional cricket and reflects the club’s commitment to increasing the profile of the region’s women’s team.

New Home for The Blaze

The team will now be based at the iconic Trent Bridge and their home matches shall be hosted here. The team will have access to all the facilities and resources they need, to bring the best out of their players.

Positive Impact of The Blaze

This move will be of immense benefit to regional cricket as it will engender a great feeling of enthusiasm and camaraderie among female cricketers. Furthermore, The Blaze will inspire many more young women to take up cricket and become competitive.

The move of The Blaze to Trent Bridge is a testament to the commitment of the Notts Cricket Club to the development of regional cricket, and in particular its women’s team. The new name captures the spirit of the team and their ambition to become a leading force in regional cricket.

The Blaze has huge potential to positively impact on cricket in the region, offering local female cricketers a strong platform to reach their potential. We are incredibly excited to welcome The Blaze to Trent Bridge.